When I posted on this fitness blog that I wanted to lose 5 to 10 pounds, I got a huge number of readers — more than 60. The number of readers inspired me. I’d hit a nerve. I planned to update regularly on the good news of my easy weight loss. Ummm… Hmmm… Not so much.

Since posting that goal, I’ve said nothing on this blog. I have nothing to report.

As someone who’s never tried to lose weight, I’ve discovered that the story of weight loss is boring. And not too fun. I am not a fan of depriving myself, even in small amounts.

I have tried to cut my portions. Like last Sunday, instead of eating a whole burrito from Chipotle, I split it with my son. I am trying to eat a little less, eat a little healthier and ride my new bike a little more. This does not make for a good story. Good stories have drama — big news, big changes, big ideas, big laughs.

I’m all for little things making a difference over the long haul. I’d like to post some huge, big news. But all I’ve got today is this one small idea. Small is beautiful.

I want to lose 5 to 10 pounds. It’s not a lot and it’s not a big deal. But I want to be faster and lighter. Being fast is important to me, as an overachieving Type A mother and writer living in New York City.

My weight has crept up. When I first met my husband about 18 years ago I was just under 110 pounds. I’m about 5’6” so yes, that was too thin. Since those happy salad days when I was single and 30, I’ve eked up a pound or two every year.

After my son was born 14 years ago, I was around 135, and then along came my twin daughters and another pound or so every year. You get the idea. A pound a year isn’t much, but if I live to my late 90s, that’s another 50 years and another 50 pounds! And I’ve heard from older women, as we age it’s harder to lose weight.

So I’m posting this goal on this blog, Running Aground. There’s been a kind of magic for me to blogging — it’s turned some things around. This is my goal — by the end of 2011, I’m aiming to lose 5 to 10 pounds and be back under 140 pounds.

Blogging works. I achieved my goal of running a 5K after blogging about it. I”m proud of myself for running a 5K on a rainy, hilly Upper Manhattan race a month ago.

Like my 5K goal, this 5 to 10 pounds weight loss goal is a SMART goal — Specific, Measurable, Achievable, Realistic and Time Sensitive.

I see two trends I can immediately implement to work towards my goal: more cardio, less carbs.

Since my plantar  fasciitis, I’ve slacked on my cardio, but with the nice weather, I’m going to dust off my bike (or buy a new one) and bike a bit in Central Park and Riverside Park to kick in the endorphins.

I’m doing this to feel good, and, yes, to look good too. And to stay fast.

My Ross is jealous of the teal fleece-basketed hottie in the basement. In its day, my bike was boss. A 10-speed from like 30 years ago, it still goes far and fast. Ann Craig gave me the bike like 15 years ago; she’d bought it for five dollars at a yard sale in the country.

About 10 years ago, a bike shop (the one on Columbus and 81st — do NOT go there) refused to replace an inner tube on my Ross because they deemed it “unsafe.” That hurt my Ross’s feelings. Sure, only five of the 10 speeds work and sure, there’s a huge rust spot on the frame, which makes me think that one day, before my time, it was hit by a car.

But it’s not unsafe; please don’t say that. My Ross is sensitive. And so am I. The two of us never fell so in love with another bike as when we pulled into the basement last week and there was that teal Gary Fisher, standing in a beam of light. We heard a chorus of angels sing; she stood proud like a mannequin. It’s true, I fell for her too. She appears to be partnered with a red boy’s bike, also gleaming, shining, new, unridden. That cute couple, they have it all, holding court in the bike storage area of my basement.

I think the only time I ever got a new bike was when I saved up my babysitting money and got myself a dark blue Schwinn. I was 13. All of my NYC bikes, and I’ve had four or five, have been used. I used to buy them at Union Square. The last one was a Schwinn. It was stolen right outside of Marble Collegiate Church, one summer night when I was at a women’s spirituality group. Getting a bike stolen can bum your spiritual high. But my Ross has never been stolen.

The Gary Fisher looks like it’s never been any where. She looks like a bored housewife. I could take her places. But I have to take my Ross and head to work.

Damn you, you adorable bike! Why’d you have to be so cute and make me and my Ross feel so bad? You’re a girl bike and I ride a boy bike, so you can see, I am feeling a little curious by my new attraction. And so is my Ross. Honestly, I’ve always liked boy bikes. I still do. That Gary Fisher girl bike is just so sweet.

Yesterday, when I hopped on my Ross to head up Riverside, his pedal came off under my left foot. I pushed it back on, grease on my fingers. It was raining a little. My Ross has no fender. As I rode up to work, my bum got wet. Besides, I was wearing a floor length skirt that I had to knot up around my thigh. I’m either tying my long skirts up on that bike, or sliding my short skirts lower. I just felt miserable. A boy bike is not optimal when you wear a lot of skirts.

I think  the Gary Fisher has defeated my Ross. Why did she have to show up in the basement? So hot and so cool. Damn you, Gary Fisher! But look at her, isn’t she sweet? 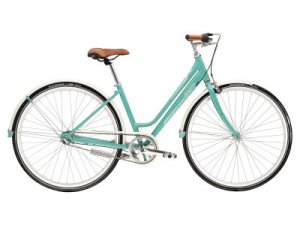 I need to do the laundry, but I did this. #beautyiseverywhere #heyslowdown #noticetheworld #poeminpocket #acrylics #newyorkcity #urbanlandscapes #the100daysproject #100daysofpoemsandpics #mindfulness
My colleague told me, “Go outside! It’s absolutely beautiful today. Go stand on the corner in the sun by the Guggenheim.” So I did. I was grateful.
I like feeling like I am in an upside-down Noah’s Arc. The oculus. #the100dayproject #100daysofpoemsandpics
At Wave Hill - peeking into the locked green house, waiting on spring.
Ice skating in Westport, New York. Sweet rink at Ballard Park.
Arrived in time for a glass of red and a nap.
Grand Central Terminal-
February comes, a month of hygge, squirrels burrow in the knots of trees, stalks huddle in the too-cold shade, waiting for the glimmer of a warming sun. February kills my high, bums me out. with its soft slow snow, feathery fistfuls. February, the heart-smacking, lip-centered, wait for longer days. For the spring of birthdays, of another hula hoop, scoop around the sun, for stronger days, when the shoots doesn't break in the brittle cold, and the loon calls from the lake. And even the Met opens her front doors, wide, like a seamstress, ready to unfurl her crazy quilts.
Coming upon the Metropolitan Museum of Art on the morning crosstown 79th Street bus. #chillyscenesofwinter #100daysofpoemsandpics #the100dayproject
After today's second dose of the vaccine, I feel freer but not free. I will follow my bliss but ever so cautiously, slowly. And here's something to know about me when we meet again, I will not shake your hand or anyone else's hand for that matter, Never again. Alas, I will hug you.