Commuting by bike to the Upper East Side from the Upper West Side is a pleasure. Last year at this time, I was working two part-time jobs and commuting between Morningside Heights and the Financial District. I spent way too much time on the subway. I tried to remain centered and calm despite the subway crowds. I tried to follow a path of mindfulness.

I’m not alone. I dig this story from today’s New York Times on how to meditate on your commute by Jonathan Wolfe:

Can you listen without attributing a positive or negative emotion to the sound?

Take it one step further, Mr. Gelles said: Practice metta, or lovingkindness, meditation by silently wishing well to the people around you.

Sometimes the subway’s too hot; people get cranky. My daily bike commute, riding through Central Park, is just lovely. No one’s in a bad mood.

I try to practice lovingkindness from my bike. I mentally say “Good for you” to the people I pass. (Or the lycra-clad bicyclists who pass me!) I find it especially easy to say ‘Good for you!’ to the birders, the children walking with their parents, or the old people.

And occasionally I hit a solitary patch on my ride, especially if I ride through the Ramble. It is totally quiet and peaceful. It is as if I am in the country woods, not in the center of the hustling bustling city.

Ladies, if you want to start Citibiking, you can link to Women’s Bike Month for a free ride. Once you try commuting by bike in the city, it’s hard to stop. But sometimes it’s hard to start and you need a nudge. Take it from me. When December and January roll around, I will not be so lucky to ride so much. Until then, I’m enjoying every minute. 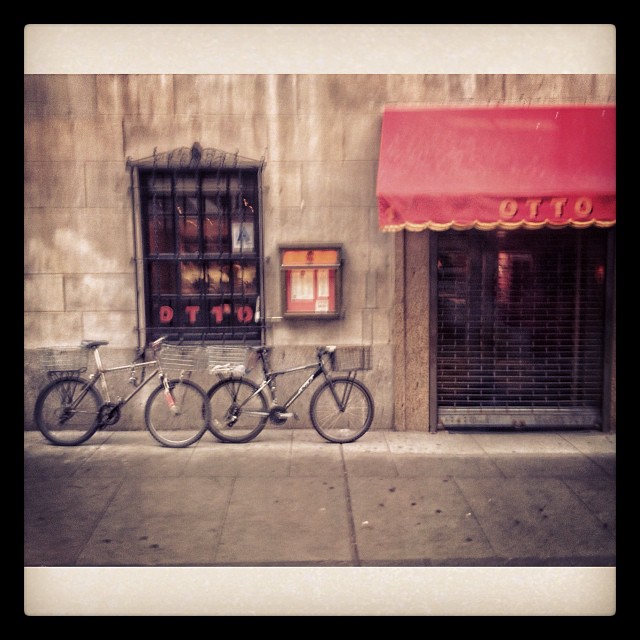 Join 4,905 other followers
Follow 100 Days of Poems and Pics on WordPress.com

“The person who loves their dream of community will destroy community, but the person who loves those around them will create community.” -Dietrich Bonhoeffer.
The Feast of San Genarro - pasta, sausage and onions, street singers, sangria, smoothies, cannoli! classic NYC!
Biked to the lighthouse with friends on a drizzly Sunday morning. So fun…(and exhausting)
Have lived (and loved) NYC for 40 years and today was my first trip to Governors Island. It was our professional development / community building day. So much fun - leisurely and joyful. A great start to a new academic year! Our tee shirts say it all, “If we can hope it and dream it, we can make it happen!”
Day 3 of new teacher training - new haircut, sip and paint project (mine has the big moon!), and my dog wondering ‘Where are you? I thought we stayed together!’ Get ready, 7th and 9th grade English students!!!
Fun times in August/ Westport. Dropping off @yorker999 to yoga teacher training @kripalucenter - art studio tours w/JCJ meeting fabric artist Cheryl Raywood - dinners out @wyclakechamplain yacht club - artsy/educational events @northcountrycreamery - hikes with visiting friends @primadarling - and civic duty - getting folks registered to vote at the farmer’s market with @cheriphillips56
This was a rainbow trapped in a sunset @ballardparkny
I like to see the sunset as sherbet. This was tonite’s rainbow-flavored from the ice skating shed after Ballard Park’s @meadowmountschool concert - thanks to @dacymeadowfarm for the dinner!
Weddings are so much fun because you show up as so many people - aunt (of the groom), mother, sister, in-law, daughter, friend. Congrats and thanks to Travis and Sarah! We had such a blast! It was good to be together.
Me to Play, our film about two actors living with Parkinson’s Disease, documents their attempt to put on Becket’s play Endgame - and a bit about their families. The film showed at Lincoln Center a few nights ago. Folks wore headsets to hear well outdoors. I hope a lot more people see this (for free) and we continue to get into film festivals and maybe eventually a network. Because Dan and Chris’s resilience, artistry and love bears witnessing.