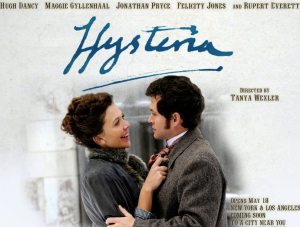 I learned a lot from this movie in which many Victorian women have pleasure at their doctor’s hand. Here are my take-aways:

2. While many Victorian women sought help from doctors, it is likely that their husbands were not able, willing or interested in doing their duty. So, alas, women turned to Hugh Dancy.

4. The doctor, while doing his duty, asked the female patient things like, “Is that all right?” Sweet! (The expressions on the women’s faces were priceless!)

5. Settlement Houses for the poor did (and do!) a lot of good. Especially when a headstrong woman like Charlotte, played by Maggie Gyllenhaal, was in charge.

6. In running the Settlement House, Charlotte had a secret agenda — to empower women. Love that! (Also, she refused to put down socialism — the French would agree!)

In most mainstream movies, it is a given that men must seek pleasure — usually from flawless, scantily clad woman wearing black lace. In this movie, there’s a bit of lace but it is found in a high collar or a long skirt. When the women are pleasured by the doctors, they are fully dressed, and their lower bodies are hidden behind a velvet curtain (which resembles a puppet theater).