Here are a few quick snapshots from my reunion today down in the Village. This ‘playable actions’ slide, a call to remember our purpose in public speaking, is from a workshop in finding your voice. The leader, Jackie Miller of Be Spoken Partners, reminded us that actors trains for six, eight, ten weeks so when doing public speaking, we should likewise train and be well prepared. The gifts of having an actor’s training with emphases on breathing, posture, focus, all translate well in daily, needed communication skills. Her exercises were experiential and fun. 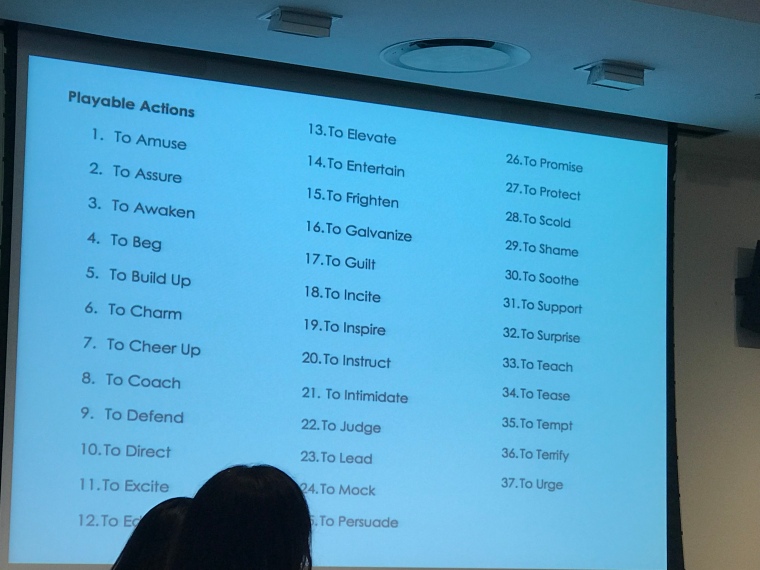 This first workshop I attended, basically on disputing fake news, was led by Michael Posner, who runs the first ever human rights discipline in a biz school, Stern School. On the upcoming 70th anniversary of the Universal Declaration of Human Rights (thank you, Eleanor Roosevelt) — and on a day like today, with, God help us, a horrible synagogue shooting  — we must know that all humans have rights simply by being human. Rights to worship, learn, be safe. This is the universality of humanity. This is our right.

He also called upon the digital platforms to do a better job of prioritizing information. “The most divisive posts become the most amplified.” We react to emotion — fear and anger, mostly.

“You’re not editors, but you’re prioritizing information,” he would say to those who run search engines and social media. And the companies have a responsibility, to take down, “not just what’s illegal, but what’s not right.” And to call out the bad actors, like Russia, who plays upon a country’s divisiveness.

And, finally, as I was leaving my NYU reunion day, after a lovely breakfast, lunch, and evening party, as well as additional workshops, I saw this message at Judson Memorial Church. It is why I love the village and have always loved NYU. The community opens your mind.

I don’t know about you, but sometimes the sun rises on my block. #nofilter #sunrise #morninghasbroken
On Saturday, Jolain and I took a long walk and talk in Central Park, after stopping at the Jewish Museum and the Cooper Hewitt. So grateful for all the beauty in NYC.
Sometimes your Saturday mornings in winter feel like Sunday mornings in spring. Just because the world feels full of possibility. And the sunlight roars hello. A new day. Dawn. #travelswithcharliedog #NY1Pic
What a year!
Thanks to @ledgehillstudiodowntown for the groovy fun acrylic family paint party - we each created something different with a red dot on a blank canvas!
Sure, this
Merry merry! Happy happy! From us to you! 2023, here we come!
Another swim day (and sweater weather!)
Sure, the air was 68 degrees and so was the water, but it makes you feel alive … #winterbreak
You know that you’re walking the dog pretty early when the moon is still out. #themorningwalk