Although I cannot discuss the criminal trial I am being considered for, I can disclose what happened in the hallway.

Apparently, a very large light-skinned bald man (Large Man) ran out of his courtroom and ran towards the elevator bank and a set of open windows.

Earlier, I had been talking to Juliana on the phone from that very windowsill. I had been sitting, taking notes when a glamorous cop told me, shaking her head, “Do not sit on the windowsill.” I complied.

I swear. At that time, I had thought, someone could so easily jump out these windows.

And that, I believe, was the Large Man’s intent. I did not see him run, pursued by cops. I was in a nearby stairwell, (again, on the phone). We were on break from this loooooong jury selection process.

But I did hear and see a cop came running down the stairs next to me. I followed him. There was some police action right in the hallway.

Another juror told me that she saw it all — the Large Man, hand-cuffed, running down the hall with several cops in pursuit. When he climbed up on the windowsill, they pulled him down. I did hear the thump on the marble when the Large Man hit the marble floor.

The Large Man started screaming. Another cop told me later that the Large Man was screaming to get his handcuffs off, but the court officers could not comply. (My fellow juror told me he wore two sets of handcuffs.) Another officer shoo-ed us out of eye shot. But later, he told us, it was for our own protection, and not because Large Man was being hurt.

All 50 or so of us jurors looked at each other, slightly worried, eyeing the elevator bank, where all this commotion was happening, until they wheeled the Large Man on a stretcher out through the service elevator.

I said to my fellow juror, “That must’ve been traumatic to see him up on the windowsill, wanting to jump.”

She said, “Didn’t see much. I got out of the way in case the cops had to shoot him.”

I know I mostly blog about how much I love NYC and how beautiful and safe NYC is. And you can see from my photos of trees, flowers, picnics, museums, and Broadway shows, it’s true. But I guess I must admit there is a seamy side to the city. Fortunately, I only see this side every four years when I serve my stint on jury duty.

This was the surreptitious photo I took of the incident — after the cops told us, basically, ‘Move along. Nothing to see here, folks.’ And this incident is why jury service at the criminal courts in Manhattan is not for the faint of heart. 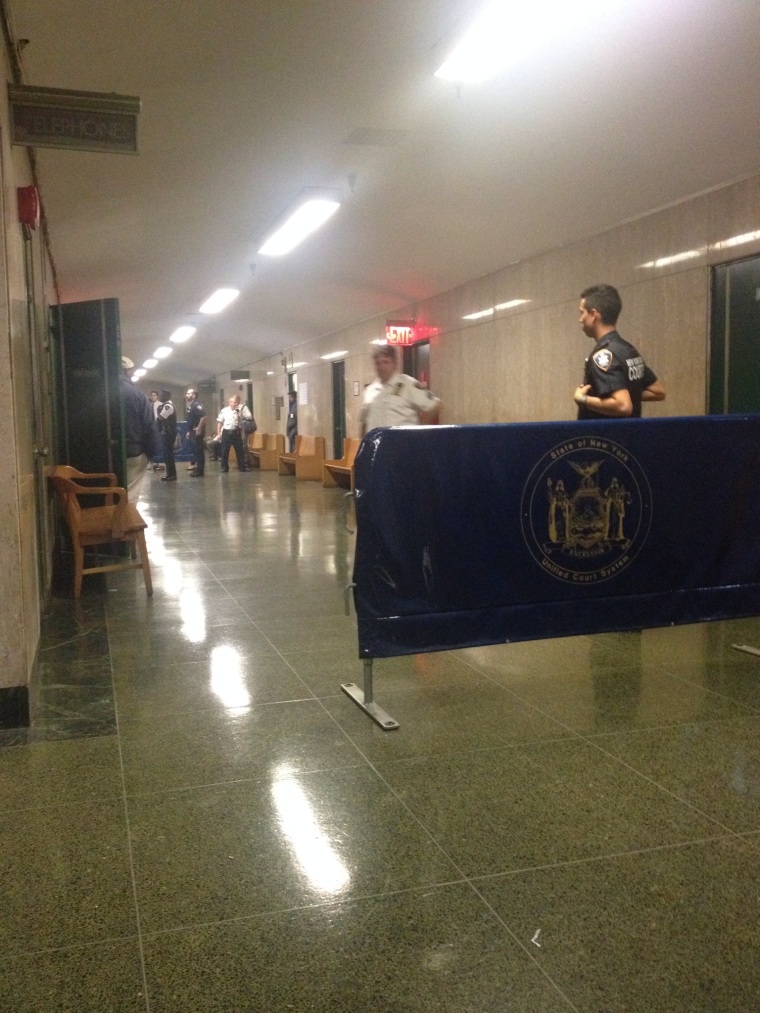