Yesterday, chilly, I was on the sidelines for CoCo’s 8 am soccer game. I was rewarded for this parental duty by seeing her score two goals. WTG! FTW!

I got thinking — being a spectator at a soccer game is not as much fun as being an audience member at a school play, as I was last weekend. 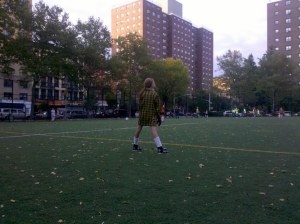 It’s better to be a theater mom (than a soccer mom):

1. The hours are more reasonable. (Theater would never start at 8 am.)

2. The seats are more comfortable. (There are no seats on the soccer sidelines.)

3. The show is indoors. (No need to wear mittens!)

4. The cast party has better food. (Last weekend, after the play, we had finger foods and oodles of fancy cupcakes. After the soccer game, we shared a box of Entenmann’s.)

After the play, we lingered, carrying flowers for the performer, waiting for her to make her entrance. Of course, theater mothers have bad reps as stage mothers, controlling divas, whereas soccer moms are wooed by politicians, trawling for votes.

Writing about this — about being a supportive spectator at a play or game — reminds me of how I had to shift my attitude about my own importance once I had a baby. Suddenly, no one was that interested in me unless I brought along the baby. If I showed up empty-handed, people would ask, “Where’s the baby?”

I was no longer the star of my own show, I was a bit player with a walk-on part. Or maybe I was the dresser, making the star look good, staying backstage. At least now, with my kids as teens, preteens and tweens, I’ve moved from “back of house” to the “front of house.”

On the sporting event’s sidelines or in the audience, I want my kids to do well, look good and, God, I hate to admit this, but I also want them to, ever so occasionally, share the spotlight (with me).