Our first assignment was: pick any character from the Hebrew Bible (Old Testament) and write a story from that person’s view. 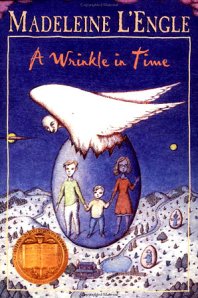 My story was literal and dramatic (that seemed to be the tone of the bible and I write what I believe is assigned). But Madeleine fulfilled the assignment with an imaginative and funny story. We both wrote about the woman in the window at the edge of town.

I remember thinking, “That is NOT the way the story goes, lady. But you’re Madeleine L’Engle, so you can change the bible any which way you want.”

I got in her class because I’d been going to All Angels’ Church — I loved the warmth and elegance of the worship, but was less in love with its evangelic and literal zeal. I wrote about this church when I started my Church A Day visits, the post was called: A Beer, A Bra, Then Church: at: https://mbcoudal.wordpress.com/2010/08/16/

Back to getting in Madeleine’s class, when I worshiped at All Angels’ the pastor, Rev. Goode, invited any regular church goers to sign up for her class.

About a dozen of us met in her home, for a couple of summer months. She lived in a big rambling Upper West Side apartment which I loved and felt I could easily move into — she wouldn’t even know. She seemed to have a lot of guests coming and going.

She was getting old — still classy yet pixie. She held court from a big easy chair.

She liked talking about writing and listening to writing. I remember she liked my work. I felt we were kindred spirits, not only as writers, but because we were both married to actors, which gives a marriage a certain gypsy charm.

Another assignment: Write about a recent ethical dilemma and how as Christians we answered that dilemma.

I vividly remember one young man’s story. He was riding a night train in Europe. After the conductor collected tickets, a man who had been hiding, crawled from beneath the young man’s seat. The stowaway asked not to be given up and hid again beneath the seat. The conductor returned, asking, “Have you seen anyone else in this compartment?”

Should my classmate tell about the man hiding beneath his seat? Would you? It was a scary, true story. And the young man said he tried to think, “What would Jesus do?” I don’t remember how he answered. I only remember that my classmate was still plagued by this dilemma, believing he’d done the wrong thing.

Her class allowed us to admit we might be wrong. We had to be honest and imaginative.

I have to get to work now.

I have no idea why I woke up this morning thinking about Madeleine L’Engle and her writing class. That class was probably 16 years ago.

Maybe it was simply a Wrinkle in Time.

Or maybe I thought of Madeleine because yesterday I wrote about another aging mentor, writer and friend, Bel.  http://mybeautifulnewyork.wordpress.com/2011/05/11/bel-kaufman/