I exercised for the first time in two weeks, swimming my eight laps at the Hyatt Regency Hotel in Montreal. I zigzagged kickboards and babies in floaties.

Exercise is my anti-depressant. Swimming made me feel great.

Since my basal cell surgery two weeks ago I’ve had to lay low. I don’t like that. The winter doldroms set in. My overall mood is down if I don’t exercise (or write!)

It is better for everyone if I work out (and write) a few times each a week. So the other night I considered running a 5K on New Year’s Day in Ticonderoga.

I still had a bunch of stitches on my chest (where the basal cell was removed) and was not supposed to exert myself. I didn’t want to pop a stitch like an overstuffed teddy bear (which is how I felt after eating and drinking my way through Christmas). I hesitated. I had a lot of housework to do.

I had to pack up my family after 10 days in the country. That’s at least as much work as running a marathon. I had a cappuccino (also an anti-depressant) and had an idea. 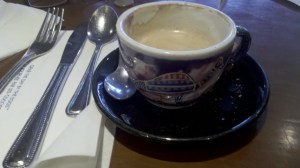 “Kids, we’re going to have our own race — to the old school house. You could win! It’s a race against me!”

At my 15-minute mile pace, almost anyone could beat me! But my kids are lazy. Yes, they are lazy, lazy, lazy. And it’s my fault. I’ve spoiled them. They’d rather goof off on Facebook than run.

The girls did walk/run for the first five minutes then they turned around and slogged back to their computer screens. It wasn’t even cold.

I had a weird experience as I ran. There was no wind. Yet I heard a flapping near me, like someone snapping clean sheets while making a bed. I looked around. Nothing. Not a breeze. It happened again. I kind of wished I wasn’t alone so I could ask someone, “Did you hear that? Wasn’t that weird?”

The front runner is the lonely (and possibly delusional) runner.

I came back, declaring victory, like Rocky on the steps of Philadelphia. When you’re the only runner, chances are good you’re the big winner! But I received neither a medal or champagne. Instead, I made myself some more coffee and folded the laundry.

2 thoughts on “Loneliness of the Short-Distance Runner”