I was headed to the Church Center for the United Nations to spend a day with peacemakers but in the crush of 42nd Street I ran into a group for whom I’d led a communications training a couple of days earlier.

I pointed them in the right direction (they were heading towards Fifth Avenue instead of First Avenue). In gratitude, they offered me an extra ticket to their United Nations tour. I’d done the tour a few times, but it is ALWAYS different and always great, led by some brilliant international young person.

Our guide was the super-smart, super-gorgeous Jali, an Egyptian mother and artist who was a tad bit disillusioned with the effectiveness of sovereignties who fail to implement the UN resolutions. 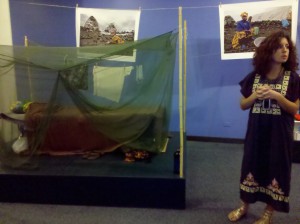 Extremely powerful– one of the last exhibits on the tour is the one on landmines. This is the heartbreaking reality — the landmines look like yoyos and rocks. So ten years after a war has ended, who picks up the yoyo or rock hoping to play? Children.

They are the ones maimed and killed by landmines. And even though 11 years ago, 156 nations signed the UN Ban Mines Treaty, China, Russia, and the United States have not joined. Ugh! So embarrassing to be an American when you hear this.

I chatted with Jali about the UN, her art, raising children in NYC. I said good bye. I will probably never see her again.

I started to walk out of the UN to get to the church center meeting, but I spotted a group of women. They were as pretty as water lilies floating in a Matisse painting. I walked towards them. They departed by the elevator, and I wa

s left standing in front of the UN Meditation Room which is right beside the Marc Chagall peace window.

Despite my love for the UN and the many times I’ve been there, I never knew there was a chapel in the UN. It was dark but for a couple of shafts of light. There are so many faiths around the world that the chapel is intentionally free of symbolism. The beams of natural light are the symbols. Oh, and there is a slab in the center of the small space. It reminded me of the sacrifice stone upon which Aslan, the lion and Christ figure,  is sacrificed in the movie, “The Lion, The Witch and the Wardrobe.” It is a big stone in a small room. The big rock and its sacrifice altar quality — made me uncomfortable. I tried to focus on the shafts of light.

I wanted to sit a while. The space reminded me of one of the favorite churches I’ve visited — the Louise Nevelson chapel. https://mbcoudal.wordpress.com/2010/08/18/the-gospel-according-to-louise-nevelson/

But, as often happens, some tourists walked into my sanctuary. (Note to self: Learn to love the tourists.)

I also have to admit I consistently feel ridiculous and indulgent sitting quietly in churches. I know there is work to be done. Kids to provide for. Articles to write. Work meetings to report on. Phone calls to make. Emails to read.

Why should I get to sit quietly in the middle of the day contemplating sacrifice, land mines, spirituality, peace, my own sanity? Then again, why should I not? I take in a church a day the way other people have a cigarette break.

My church a day visits are my break. I could do a lot worse. 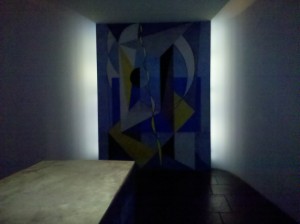 4 women, 2 nights away. We should be good for tonite.
Yes. It only lasts a little while.
Muted morning
Walk with me again from the east side to the west through Central Park in early April.
Again, I walked through Central Park.
Took a walk
What the hell happened to LaGuardia Airport? I leave town for spring break and I come back to this gritty dump all prettied up! Love it!
Me and Joey
Times Square, lioness,
Happy Sunday.