Riverside Church. This is an easy one. Right next door to where I work. Maybe I should’ve saved my visit to this church for a rainy day. Not a beautiful, blue-sky day. I ran over there at 4:15 the way a smoker busts out of the office for a cigarette. A quick puff of spirituality. 5 minutes away from my desk. I’ll BRB.

Really beautiful church. To get there I had to walk past a film in production using the church as a holding location. I am such a jaded New Yorker — I could care less what they were filming. I just hoped no young NYU film student working as a PA tried to stop me on the sidewalk. That’s right, some of my best friends when I went to NYU were PAs and I never let them stop me. But no one stopped me. Then I felt guilty for expecting trouble. The guys at the door just shrugged me in. No fuss.

This church is a destination church. Tourists snap pictures of the stained glass.

I sat in the middle of the the vast church. I couldn’t help but remember the last time I was in this sanctuary. In probably a similar spot. I don’t really want to remember that day. It was truly awful. The funeral for two of my friends and colleagues, Sam Dixon and Clint Rabb, who died in Haiti. I sat there not wanting to remember. But I remembered Judith Santiago’s beautiful liturgical dance; uplifting, in a time of collective sorrow.

I wanted to ask God, Why? Why do good people suffer? Why do people doing awesome, wonderful, kind things get killed?

It was hard to concentrate on the big questions today. The piano was being tuned. A handful of tourists were taking pics.

The note on the piano kept getting hit over and over. I felt like I was in a Philip Glass concert.

In the late 1990s, I heard Thich Nhat Hanh speak at Riverside Church. God, he was awesome talking about engaged Buddhism. He said we we can meditate on peace, but also take action for peace. He preached forgiveness, as a Vietnamese monk in the United States. Forgiveness was everything.

I remembered hearing the former minister of Riverside William Sloane Coffin speak (on Charlie Rose, I think) after the death of his adult son. How he would honor his son’s death by not letting one sign of Spring escape him. He would mark his son’s death by living. He would celebrate every single bud of Spring on every new tree. I often remember his words in the Springtime.

I walked back out into the blue-sky Summer day. I went back to my desk. And, okay, I went out for happy hour with a couple of work peeps agaain. (Thanks Melissa and Emily!)

Yesterday, the schedule was beer, bra, church. But today it was church, sangria, manicure.

If you are like me, visiting a church a day, visit Riverside Church. (And there’s a chapel there too, so you can go twice.) 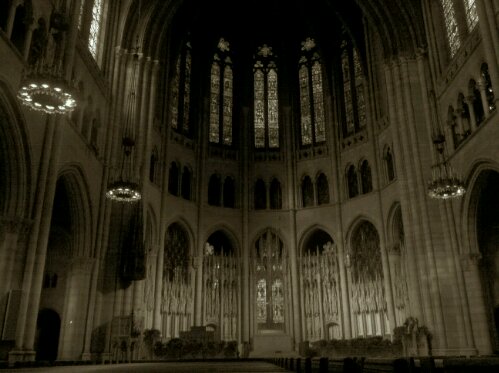